The tall women problems that are present in a day to day life can be quite overwhelming when you’re a female taller than 5’6″. When you’re a tall male, many people will tell you that you’ve won the lottery. However, if you’re a tall woman, it often feels like quite the opposite.

Negativity and feeling sorry for a tall woman are often the first reactions people have. Thankfully this isn’t always the case as tall women are far more accepted compared to many years ago. However, this doesn’t mean that there aren’t any problems tall women have to deal with.

There are several other problems that tall women will face over their lifetime, with the most important thing being tall girl syndrome and not feeling accepted in general. For many tall girls, the problems begin in high school and continue on into the dating world.

While this may all seem like doom and gloom for the taller woman, the good news is that taller people earn more income compared to a shorter person.

How much more money? It’s estimated that per inch, you could make up to $800 per year.

Not bad for being a tall Woman in the workforce. But first, you need to deal with surviving high school and the awkwardness that surrounds dating as a tall woman.

Being a tall woman can be difficult for more reasons than I have time to elaborate on. Whether it be random comments from unknown people on the streets, people trying to sneak a photo like you’re a museum artifact to asking whether I play basketball.

Even tho they are just small examples, you can start to understand when it happens so frequently that women become self-conscious about it. It becomes such an annoying daily occurrence that people begin to refer to it as tall woman syndrome, which will just make it worse.

It can get to the point where you start to feel ashamed about your height and will try and slouch to make yourself appear shorter. This will just make life worse since tall people have more back problems, so incorrect posture won’t help you in the long run.

Being A Tall Girl In High School

Having to survive the trying times we all face when growing up is made that much more difficult when you stand out. For a woman, there’s no greater way to stand out than being taller than the majority of the males. Going through a tough time like high school while being a tall girl is extremely difficult.

Going through high school has always been a challenging time in anyone’s life, but in this day and age of advanced technology, it can be made much worse with the extra social media pressure that you may face.

When you combine this with being a tall girl, day to day life can be even more difficult, as you will most likely face more adversity than your average height individuals. People like to pick on anything that is not considered ‘normal,’ even if it is something out of your control, like your height.

During our teenage years, people are quick to make assumptions about you, and some people are even afraid of you, simply because you’re taller than them.

Due to being tall, people will make these crazy assumptions about you before they even know you. Such as being picked first for a sport because people assume you’re athletic due to your height, even tho you trip over your shoelaces more often than you’d like to admit to. It’s these small assumptions that can build up over time and be a cause for young girls to have a complex about their height.

Dating In High Scool As A Tall Female

Then you have the issues of dating and if you have a preference for tall guys then it’s almost impossible until you’re older. But dating will be difficult as some people will be intimidated by your height which will make it difficult to find someone. However, don’t lose hope as there are many guys that like tall women.

Once you finally make it through high school and have come to terms with the fact that you’re going to be taller than most other females, the next big life hurdle becomes ever increasingly present, the relationship status. Along comes the dating world in full force, sure you survived high school dating, but out in the big wide world, dating can be much more ferocious.

As a tall woman entering the adult dating game, it’s not unusual to feel like you are 2 steps behind, this has a lot to do with many males being intimidated by your height. Its also quite common for the taller woman to feel ticked off when they see a short girl dating a guy taller than 6 foot.

A guy taller than 6 foot is genuinely considered the target audience, and if a shorter woman is stepping on your toes, it can feel like they’re taking away from your already limited dating pool.

People will often assume you’re older than you are which can make for a lot of strange moments. It can also make dating hard as you may get men who are much older trying to hit on you which can be worrying for a number of reasons.

One thing that will always be positive is when you find your true friends that stick with you through thick or thin, regardless of your height. This will make life a lot easier since having someone not care about your height will mean a lot. So all is not lost!

There seems to be this preconceived notion that men must marry a woman who is shorter than him. This makes life harder for taller women who already appear to have a disadvantage in the dating world as it is! Thankfully this thought process is slowly disappearing, which is about time if you ask me.

The thing is there are more advantages to marrying/dating a taller woman then there are disadvantages. There are a few small things that you can’t do with a shorter woman but it is possible with a tall wife. Something simple is being able to use each other’s shoes when you can’t find your own. Something small but useful in certain situations.

Tall women have long legs and a lot of men love long legs so this can only lead to good things! This is something a lot of guys love and you have them! This can also lead to some pretty different positions in the bedroom which we can all use more time in.

But there’s more to it than just looks, there are a lot of physical advantages to marrying a taller woman. If you’ve ever been to a concert or grocery shopping with a shorter person, then you will know they have their own difficulties. Being unable to find them in a crowd or having to get something off the higher shelves are both problems you don’t get with a taller woman!

Pros & Cons To Being A Tall Girl

There are a lot of pros and cons to being a tall girl, with some of them coming down to how you approach the world. Like wearing heels to a venue and feeling like you stand out as the tallest female there. You most likely are the tallest person there, but your legs that are naturally better than others will stand out even more!

Being taller does sometimes come with being more awkward in certain circumstances. But there is a certain charm to be clumsy that a lot of people find cute, so you should embrace your clumsiness!

Food is one of the biggest advantages of being a tall woman! You can eat a lot more than others since your body needs those extra nutrients. You can eat more than your shorter friends and not gain the weight that they may.

If you’ve ever been on a road trip with a group of people there is always that one person who yells shotgun for the front seat. Being tall you get to override their shotgun since your legs need the room and their shotgun now means nothing, while you get the comfort of legroom.

Be Happy With You

Accepting that you’re a tall woman is the first step to overcoming any tall woman problems you may face in the future. Just remember, tall men have similar problems, so you’re not alone. In life, our main problems center around love, career, and friends. Once you accept your height and become a strong confident woman, your height will never be an issue.

Finding a man that accepts you for who you are, is far more important than dating a guy simply because he is taller than you. Love is far deeper than that and once you understand this, your dating life could vastly improve.

As I mentioned earlier, extra height in the workforce is seen as powerful, confident and people generally expect you to be a good leader. These are qualities and employer would be happy to have. So go into any job confident and let it show through your tall statue and the world is your oyster.

Friends come and go, but true friends will never shame you for being tall. Remember this and you will have only the best company you could imagine with you for life. Never accept discrimination simply for the fear of having no friends. Height discrimination is real and one that we should all take a stand on.

While being tall certainly has its uses, when taking a deeper look into tall peoples heart problems and associated risks, you may […]

Everyone has a pet peeve when it comes to thoughtless questions. If you happen to be considered tall, you are probably tired […] 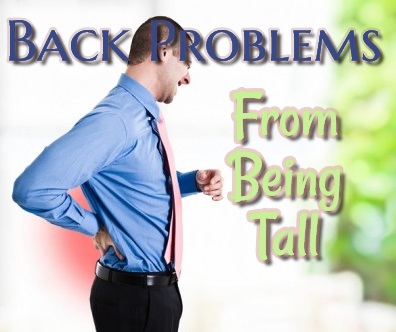 One thought on “Tall Women Problems [The Struggles Real]”